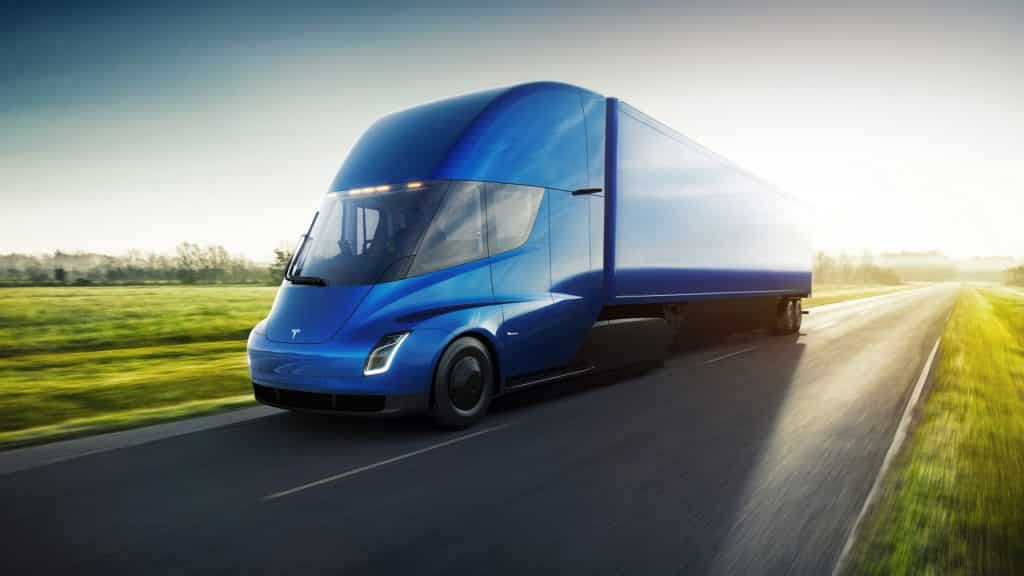 Autonomous and electric vehicles, platooning, big data, integrated tech: innovation in trucking is sure moving the industry forward. Smart solutions have inherently changed the way goods are transported around the world with analytics creating a more efficient supply chain – and the industry knows it. According to Supply Chain Management World research, 64 percent of executives think that big data and the insights it brings will have a disrupting power that can pivot the industry forever. And why wouldn’t big data and innovation be changing the game? Amazon is using it, Maersk is using it, Walmart is using it. The world’s biggest companies are already integrating tech-driven and data-backed solutions to make their operations as efficient as possible. In fact, one study found that 98 percent of third-party logistics companies (3PLs) and 93 percent of shippers believed data-driven decision-making was essential to supply chain activities.

Technology is revolutionizing how trucking companies deliver, and it is not only about speed – lives and money are also being saved in the process. Let’s take a look at five technology and innovation trends which are disrupting the trucking industry:

Electric vehicles and the way we move

You’ve heard the hysteria surrounding electric and autonomous vehicles, but the technology is more than hype: it really is revolutionary. Tell someone 20 years ago there would be driverless trucks powered by electricity on the road and they would have laughed. But that is now the reality, and it is a reality poised to forever change the trucking industry.

“With more advanced trucks, break-downs will be less common and repairs less frequent. Such advancements herald a seismic shift to the industry. But most importantly, reduced accidents from self-driving and assisted technologies are going to save a lot of time, money and lives.”

You’ve probably heard about Tesla and its autonomous electric trucks, but what about Nikola, or Einride or even such giants as Daimler and Volkswagen? Each of these companies is also making inroads into the trucks of the future. Trucks continue to be leveraging the latest technology for safety and efficiency. These innovations include lane-assist and assisted braking features, which will lead the way to true autonomy. And with more advanced trucks, break-downs will be less common and repairs less frequent. Such advancements herald a seismic shift to the industry. But most importantly, reduced accidents from self-driving and assisted technologies are going to save a lot of time, money and lives.

Though trucks are yet to reach complete automation, they can stay at a consistent speed and maintain a safe distance from other vehicles. One challenge facing electric vehicles at the moment is their travel range and charging infrastructure. Last year, Tesla revealed that its new Tesla Semi Truck will be able to drive as far as 800 km on full batteries and can get an additional 600 km range with just 30 minutes of charging. 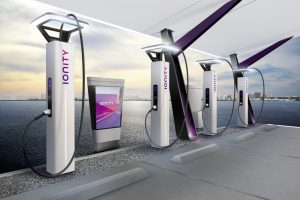 While Tesla presents such numbers with the most expensive version of their truck, Volkswagen is already looking into delivering better results and at the same time decreasing the cost of the electric vehicles with solid-state batteries. This technology has further advantages over the present lithium-ion batteries: higher energy density, enhanced safety, better fast-charging capability and the batteries are taking up significantly less space. Therefore, it can lead to a 2.5x increase in the distance range for the electric vehicles.

But as regular vehicles need gas stations, electric vehicles cannot exist without a proper charging infrastructure. While such giants as BMW, Daimler, Ford and Volkswagen join together to create a high-power charging network across Europe, Tesla is already looking to improve its ecosystem worldwide with Tesla Supercharger Network. With such pace of development, this technology does not just look promising – it looks inevitable, therefore the industry should better prepare itself and embrace the electric wave and the potential of advanced trucks. 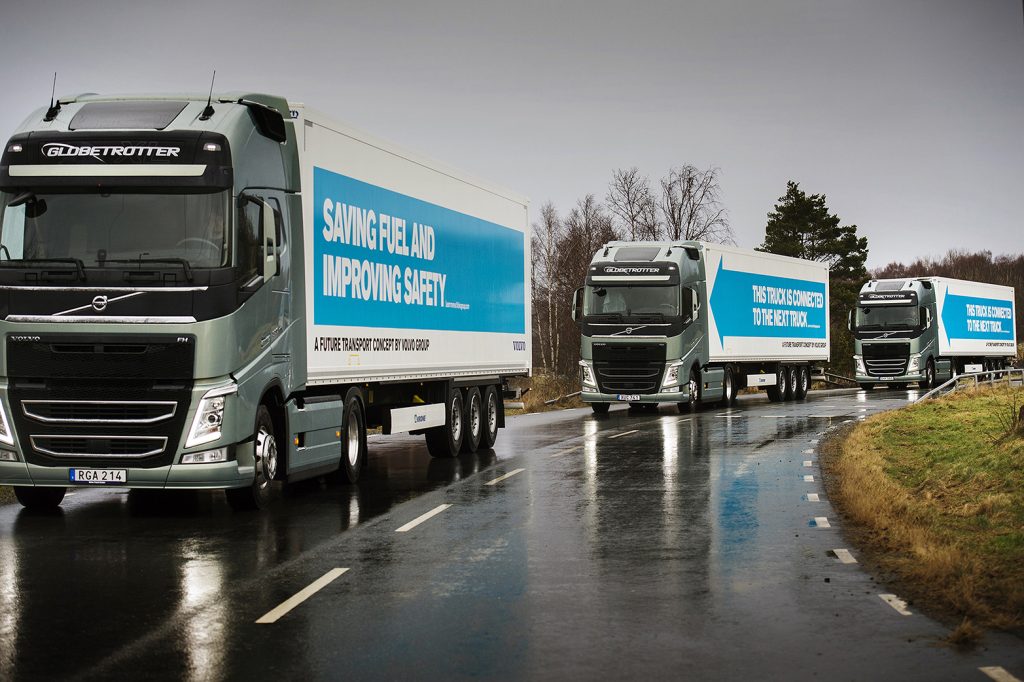 And with more advanced trucks comes more precise driving. Improved driving systems now allow for trucking rigs to arrange into formations. These formations, intricately controlled by computers which communicate with one another, follow closely behind other trucks in their fleet. It is all made possible through telematics: the sending, receiving and storing of information via telecommunication devices to meticulously control remote objects, such as trucks. The end result makes for a long line of heavy vehicles heading in the same direction, one after the next after the next.

This method, named platooning, is a real cost-saver in terms of fuel consumption and emissions. The combined line of trucks works to combat wind resistance and traffic congestion. Think about it: it also works as a safety feature for the public as well. Instead of many trucks dotted all over our roads, this method creates a single, predictable file of large vehicles. A good example of this in practice is the work done by Peloton. The company specializing in platoon technology and has proven fuel savings of 4.5% for the lead truck, and 10% for the following truck. Win-win. Although not yet widespread, platooning could soon be a regular feature on European roads thanks to the Ensemble project. A three-year project from 2018 is set to analyze how platooning impacts upon infrastructure, road safety and traffic flow.

It’s all connected with IoT 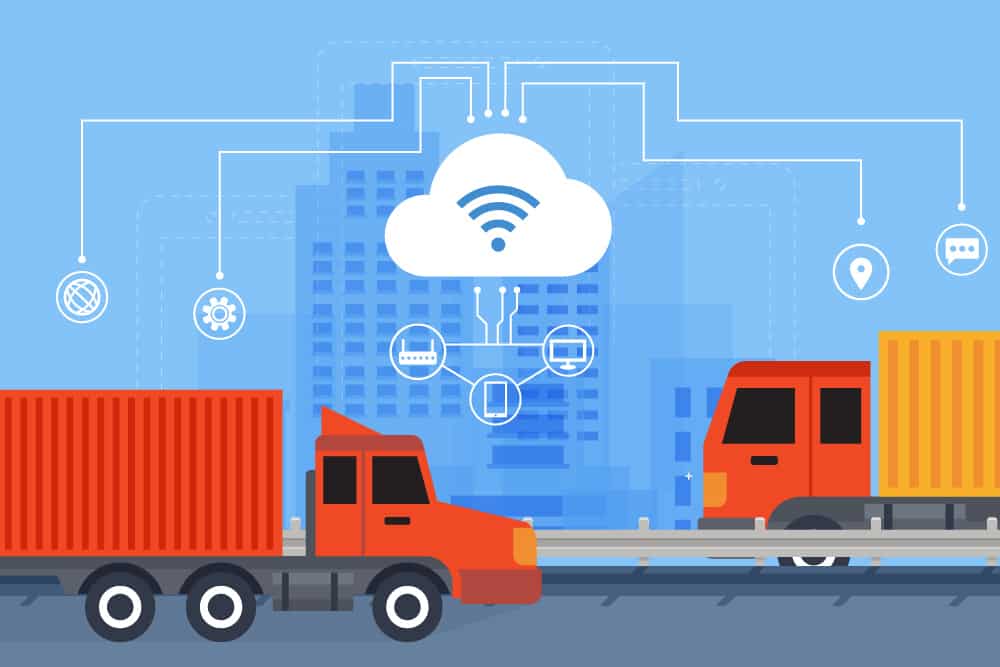 It is easy to see why the Internet of Things (IoT) is having such an impact on innovation in trucking: better location tracking, better environment sensing, better fleet management, better eco-friendly shipping, better supply-demand balance. Basically, it is just better.

IoT forms a network of devices, vehicles and appliances which can actively share data. For example, networks of sensors mounted throughout the truck can monitor everything from tire pressure to load stability. Semi-autonomous and platooned truck systems, like those being developed by Peloton, will generate even more data for carriers and shippers to manage and make decisions. This exchange can drastically improve supply chain management and minimize the amount of human intervention that is necessary in any given situation. Take for instance Kuehne + Nagel, one of the world’s leading logistics companies. They are using sensors and a cloud-based platform to provide shippers with real-time information about the location and condition of critical freight in transit. Their solution, which brings the Internet of Things to freight monitoring, provides users with alerts based on temperature, humidity, pressure intrusion detection, shock and tilt at the pallet or parcel level.

Really: why waste manpower on manually scanning each item or searching for the missing barcodes, when robots equipped with built-in cameras and QR readers can do it in a fraction of the time? Hey, speaking of data…

Big data is a big deal for innovation in trucking 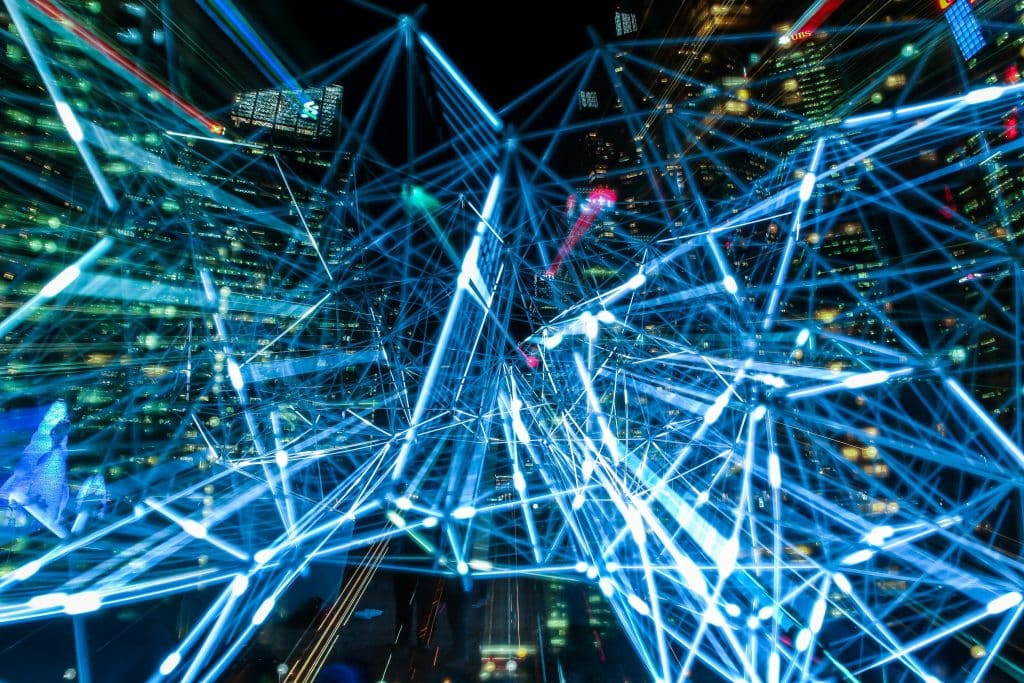 The relationship between big data and efficient delivery should not be understated. It’s all logistics: exact information on the location and real-time data analysis is revolutionizing the supply chain. However, to make use of big data, companies need to ensure that the data itself is of good quality, which is not typically the case in logistics. Fortunately, using Artificial Intelligence algorithms can help to clean and enrich the data, significantly improves the data quality. Big Data paired with AI also allows companies to forecast highly accurate outlooks for shipping volumes and to optimize proactively: planning for future performance rather than focusing on historical expectations.

Take for instance Geodis, the worldwide logistics giant. Last year they launched Neptune: a platform which uses real-time co-ordination of transport activity, reporting and analysis of key performance indicators, and document archiving. With big data at its heart, the platform allows hauliers and customers to manage all their activities from a single platform in just a few clicks.

Geodis Executive Vice President of Road Transport Olivier Royer said utilizing such tech was the logical next step: “The combination of big data, artificial intelligence and geolocation are at the heart of our current and future thinking and aimed consistently at further simplifying our customers’ activities; guaranteeing them new sources of productivity.” 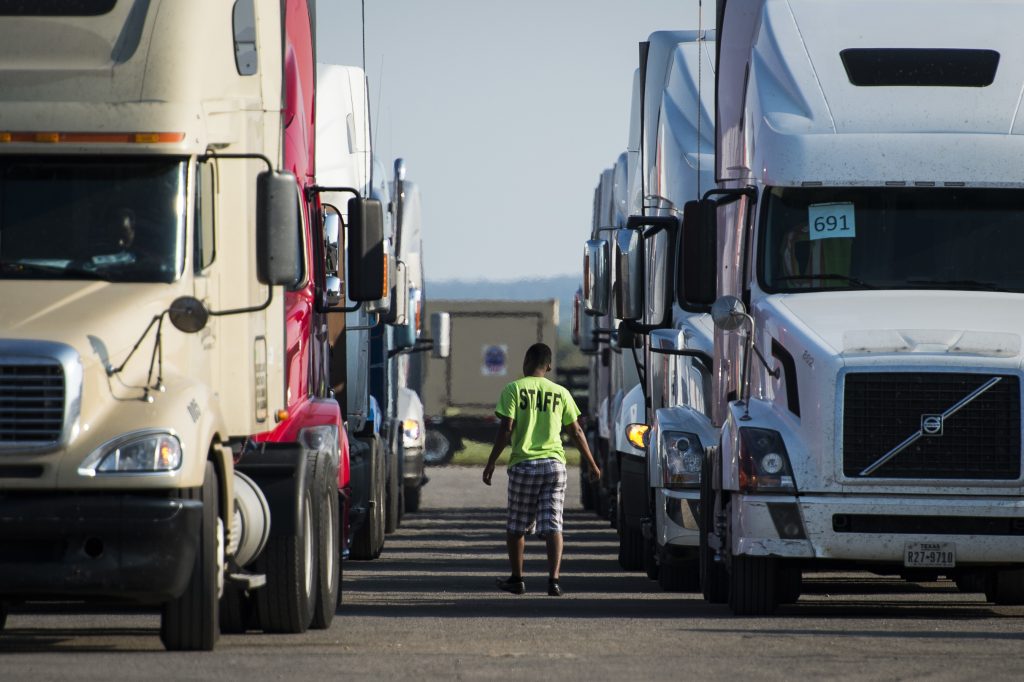 Talking all this tech can draw away from the human element involved: namely the drivers. For decades it has been the human behind the wheel which made sure goods arrived safely and securely. Human drivers will no doubt continue to play a role in trucking, but this role will revolutionize along with the industry.

“Uber predicts that self-driving trucks will be doing “dock-to-dock” runs for a very long time. They envisage a future in which self-driving trucks drive highway miles between “transfer hubs”, where human drivers will take over for the last miles through complex urban and industrial terrain.”

The implementation of automation has signalled predictions of doom and gloom for the prospects of future truck drivers. From inside the industry, however, another reality is forming. According to research by Uber’s Advanced Technologies Group, there may actually be an increase in trucking jobs as more self-driving vehicles are introduced. Uber predicts that self-driving trucks will be doing “dock-to-dock” runs for a very long time. They envisage a future in which self-driving trucks drive highway miles between “transfer hubs”, where human drivers will take over for the last miles through complex urban and industrial terrain.

Western States Trucking Association director of governmental affairs and communications Joe Rajkovacz believes there are so many more things a truck driver does than simply driving. “I just don’t believe that you’re ever going to see, at least in the world that’s imagined right now, this fully autonomous truck without anyone in it,” he said.

Drivers themselves are in a critical shortage, with Europe’s leading refrigerated road transport and logistics group STEF reporting a shortage of almost 20,000 drivers across France earlier this year. However, for the ones who do remain behind the wheel, the advancements mentioned in this article will go a long way into making their lives easier and most importantly, safer. Perhaps it will not be so long until semi-automated trucks are platooning from city to city, running entirely on electricity, with big data determining how the entire process can be done even better.

Defining Transmetrics Values During the Pandemic

Read more
We use cookies on our website to give you the most relevant experience by remembering your preferences and repeat visits. By clicking “Accept”, you consent to the use of ALL the cookies.
Cookie settingsACCEPT
Manage consent

This website uses cookies to improve your experience while you navigate through the website. Out of these, the cookies that are categorized as necessary are stored on your browser as they are essential for the working of basic functionalities of the website. We also use third-party cookies that help us analyze and understand how you use this website. These cookies will be stored in your browser only with your consent. You also have the option to opt-out of these cookies. But opting out of some of these cookies may affect your browsing experience.
Necessary Always Enabled
Necessary cookies are absolutely essential for the website to function properly. These cookies ensure basic functionalities and security features of the website, anonymously.
Functional
Functional cookies help to perform certain functionalities like sharing the content of the website on social media platforms, collect feedbacks, and other third-party features.
Performance
Performance cookies are used to understand and analyze the key performance indexes of the website which helps in delivering a better user experience for the visitors.
Analytics
Analytical cookies are used to understand how visitors interact with the website. These cookies help provide information on metrics the number of visitors, bounce rate, traffic source, etc.
Advertisement
Advertisement cookies are used to provide visitors with relevant ads and marketing campaigns. These cookies track visitors across websites and collect information to provide customized ads.
Others
Other uncategorized cookies are those that are being analyzed and have not been classified into a category as yet.
SAVE & ACCEPT